Emerald Ash Borer
PRINT THIS PAGE
A- A A+

Sections of Central Park of Morris County will be closed between now and Feburary due to ash tree removal work as part of the MCPC’s Emerald Ash Borer Response Program. To protect public safety, park users should not walk around any closures.

Why You Should Know About Emerald Ash Borer

The emerald ash borer (EAB) (Agrilus planipennis) is a non-native beetle that was accidentally introduced to the United States from Asia in wood packing material. The feeding habits of EAB larvae causes death to ash trees (genus Fraxinus), EAB’s preferred host. Since its initial detection in Michigan in 2002, EAB has spread to 31 states and 2 Canadian provinces. It has killed hundreds of millions of ash trees in North America and is considered to be the most destructive and expensive insect ever to invade the United States.

EAB was detected in New Jersey in Bridgewater Township, Somerset County in May 2014. It has been found in 15 counties including Morris County as of 2019. Morris County has the densest population of ash trees in the state, and the Morris County Park Commission (MCPC) must manage for the arrival of this pest and its anticipated impacts on the Park System. The MCPC’s Emerald Ash Borer Response Plan was adopted on February 26, 2018.

The MCPC has developed an EAB Response Plan to manage diseased ash trees to protect public safety, critical infrastructure, and select high-value trees, as well as to replant trees in critical areas to offset the impact of ash tree loss.

A significant component of the MCPC’s EAB Response Plan is an inventory of ash trees in high-use areas of the park system. High-use areas are defined as major park infrastructure, areas where park users are likely to be stationary for prolonged periods of time, paved or otherwise improved trails, and park roadways. All trees within 50 feet of the edge of these high-use areas have been marked with an aluminum tag containing a unique identification number. To date, the MCPC has identified and tagged over 12,000 ash trees in 34 facilities as part of this inventory. These tags are critical to EAB and hazard tree monitoring efforts. Please report any tampering or vandalism of tree tags to Park Police at 973.326.7654.

A primary goal of the MCPC’s Response Plan is the removal of ash trees from high use areas of the Park System before they begin to decline and become a safety hazard. Tree removals will be prioritized using two criteria: the level of risk to people, infrastructure and utilities, and proximity to known EAB infestations.

The MCPC is utilizing trunk injections of insecticides to protect select ash trees. Treatments will focus on trees in the MCPC’s historic and horticultural facilities, but may also include trees in general purpose parks that have major impacts on shade, aesthetic, or environmental aspects of the site.

The MCPC is working with the New Jersey Department of Agriculture to release non-stinging parasitoid wasps through the EAB Biocontrol Program. The goal of this program is to introduce natural enemies from EAB’s native range to help bring EAB populations into balance and reduce damage to allow for the survival and reproduction of certain ash genotypes in North American forests. To date, parasitoid wasps have been released at Lewis Morris County Park, Hedden County Park, and the Great Swamp Outdoor Education Center.

What does EAB look like?
Adults are ½” long, ⅛” wide and bright, metallic green. The wing covers hide a coppery red or purple abdomen. Adults may be present from late May to September.

What species does EAB affect?
All species of true ash (genus Fraxinus) are susceptible to EAB. EAB may also affect white fringetree (Chionanthus virgincus). EAB can attack trees as small as one inch in diameter.

What does EAB do to ash trees?
Adult females lay eggs on the outer bark of ash trees during the summer. After hatching, larvae bore though the outer bark and begin feeding on the inner bark disrupting the tree’s ability to transport water and nutrients. The larval feeding galleries effectively cut off the flow of water and nutrients in the tree, resulting in death within one to three years.

How does EAB spread?
On average, mated females fly 1.9 miles from their emergence site, but may fly as far as 12 miles. EAB is also spread long distances through the movement of infested wood, untreated ash products, and nursery stock.

Is ash a common tree in New Jersey?
New Jersey forests contain 24.7 million ash trees, 9% of the state’s total forested area. Ash is the fourth most abundant tree species in northern New Jersey forests. It is also a very commonly planted landscape tree and is abundant in yards, parks, and along streets. Morris County has the densest ash population in the state.

Has EAB been found in New Jersey?
EAB was first detected in Bridgewater Township, Somerset County in May 2014. As of 2019, EAB has been found in 15 counties. EAB was first detected in Morris County in 2017 in Chester, Morris, Hanover and Randolph Townships. Additional detections have since been confirmed in Morristown and Chatham, and Mount Olive and Washington Townships.

What are the expected ecological impacts of EAB?
Experts predict a 99% mortality rate for ash trees. Ash is an important component in many of the forests in the Park System. Ecological impacts include the loss of an important tree species that provides food and habitat for wildlife and changes to forest understory dynamics as ash trees decline and fall.

Why are healthy ash trees being removed from the parks?
With the predicted 99% mortality rate, there will be over 12,000 hazard trees to manage in the coming years. Waiting to act until trees begin dying is problematic for several reasons. Ash trees quickly deteriorate when they die and can quickly become a safety hazard. Dead ash trees are difficult and hazardous to remove because the wood becomes dry and brittle and can break apart in unexpected ways. Waiting until die-off events would result in huge strains to financial resources as large numbers of ash trees would need to be removed within a short period.

The MCPC will only remove ash trees from areas where they pose a threat to human safety and/or park infrastructure. Trees will not be removed from forested or unimproved areas. In these locations, dead ash trees will be left to provide habitat for wildlife both as standing dead wood and as fallen debris.

Can anything be done to prevent EAB from killing ash trees?
Trees may be protected from EAB with systemic insecticides; however, treatments must take place every two years for the life of the tree. As soon as treatments stop, the tree will once again become susceptible to EAB infestation. As such, ash tree treatments represent an on-going, long-term cost. Since the MCPC does not have the resources to treat all of its ash trees, and treatment cannot guarantee protection from EAB, the MCPC must judiciously select which trees will receive treatment. Treated trees will primarily be limited to those located in the MCPC’s historic and horticultural facilities, but may also include trees in general purpose parks that have major impacts on shade, aesthetic, or environmental aspects of the site.

How can I tell if an ash tree is infected with EAB?
Symptoms of EAB are usually not apparent until the tree is heavily infested. The canopy of infested ash trees will begin dying from the top down (known as crown thinning). Woodpeckers feed on EAB larvae creating noticeable “blond” patches on the bark. Infested ash trees may produce epicormic shoots as they get nearer to death. Vertical splits in the bark may become apparent revealing S-shaped larval feeding galleries beneath. The D-shaped exit holes created by emerging adult EABs are another definitive sign. 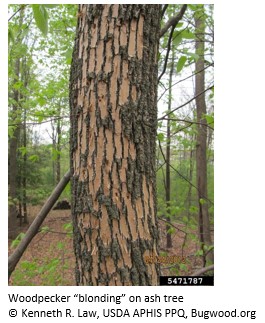 What do I do about ash trees on my property?
Experts predict 99% mortality for New Jersey’s ash trees. Options available for dealing with EAB include treatment of high value ash trees with insecticides, removal of trees to minimize safety risks, or do nothing with the understanding that ash trees will eventually become infested, die, and fall. Insecticide treatments are only effective when done in the early stages of EAB infestation. Home owners concerned about ash trees on their property should work with a NJ licensed tree expert or approved consulting forester to determine whether trees are good candidates for a treatment program or whether removal is most appropriate.

The New Jersey Department of Agriculture has regular updates on the status of EAB in New Jersey as well as helpful links for homeowners.